Eight in ten use corporal punishment on their own children

While physically disciplining children at home remains legal in Thailand, Thai parents are divided on whether this should be, latest YouGov research finds.

Two in five (41%) parents think physical punishment should be made illegal, and close to two in five (37%) think that it shouldn’t. The remaining one in five (20%) are undecided. Those who don’t use corporal punishment at home are more in favour of criminalising it than those who do. (55% vs. 38%). 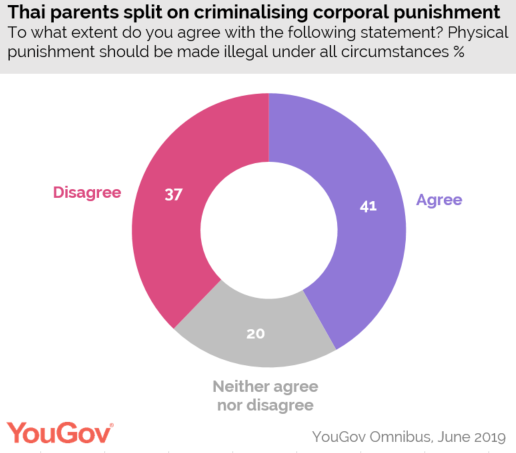 Although not all parents agree on whether corporal punishment should be illegal, the majority (79%) carry out physical discipline at home. One in seven (14%) do this often, while a quarter (24%) does this sometimes, and the remaining two in five (41%) does so rarely. One in five (19%) never physically punish their children. Mothers are more likely to physically punish their children than fathers (82% vs. 76%).

Eight in ten (83%) Thai parents were subject to corporal punishment growing up. Data shows that those who grew up being physically punished are far more likely to conduct the same punishment on their own children, compared to those who did not (85% vs. 53%). 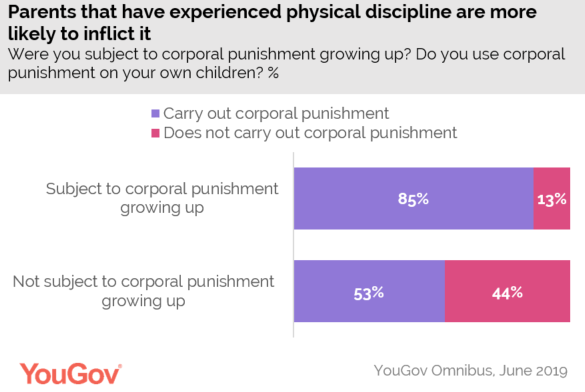 Overall, seven in ten (71%) parents think that physical punishment is sometimes necessary. The behaviour that parents think most warrants physical discipline is stealing (52%), followed by violence (46%) and bullying (37%). However, three in five (59%) believe that corporal punishment could worsen behavioural problems.

Jake Gammon, Head of Omnibus APAC at YouGov Omnibus commented: “Parenting styles vary, and the question of whether a child should be subject to corporal punishment is one that tends to spark debate. While it appears most Thai parents are comfortable with physically disciplining their children at home, they are split in thinking whether the law should come into play.”

***Results based on 9,99 Thai parents surveyed by YouGov Omnibus.