Social media thrives in The Land of Smiles, with two of the three most talked about brands being social platforms

Video-sharing platform YouTube has once again topped the charts for YouGov’s annual BrandIndex Buzz Rankings with a score of 54.6, retaining its title as the most talked about brand in Thailand for the year 2021. The social media channel   has maintained the top spot since it dethroned Facebook in 2019.

YouGov BrandIndex measures the public’s perception of brands on a daily basis across a range of measures. The annual rankings are compiled using Buzz scores from across all 52 weeks of last year. Buzz scores measure whether people have heard anything good or bad about a brand during the previous two weeks.

Going down the list, social media and e-commerce platforms continue to make a strong showing, with Shopee (53.6) overtaking Facebook (52.0) this year to come in second and the latter following in third. Meanwhile, Lazada maintained its fourth-place ranking with a score of 49.6, while fast food chain KFC rounds off the top five (45.5).

Completing the top ten are tech moguls Google and Samsung with scores of 43.0 and 42.3 respectively.

YouGov BrandIndex has also released the ten “most improved” brands of the past year, which Dairy product manufacturer Dutchmill topped with a change in score of +23.0-points. 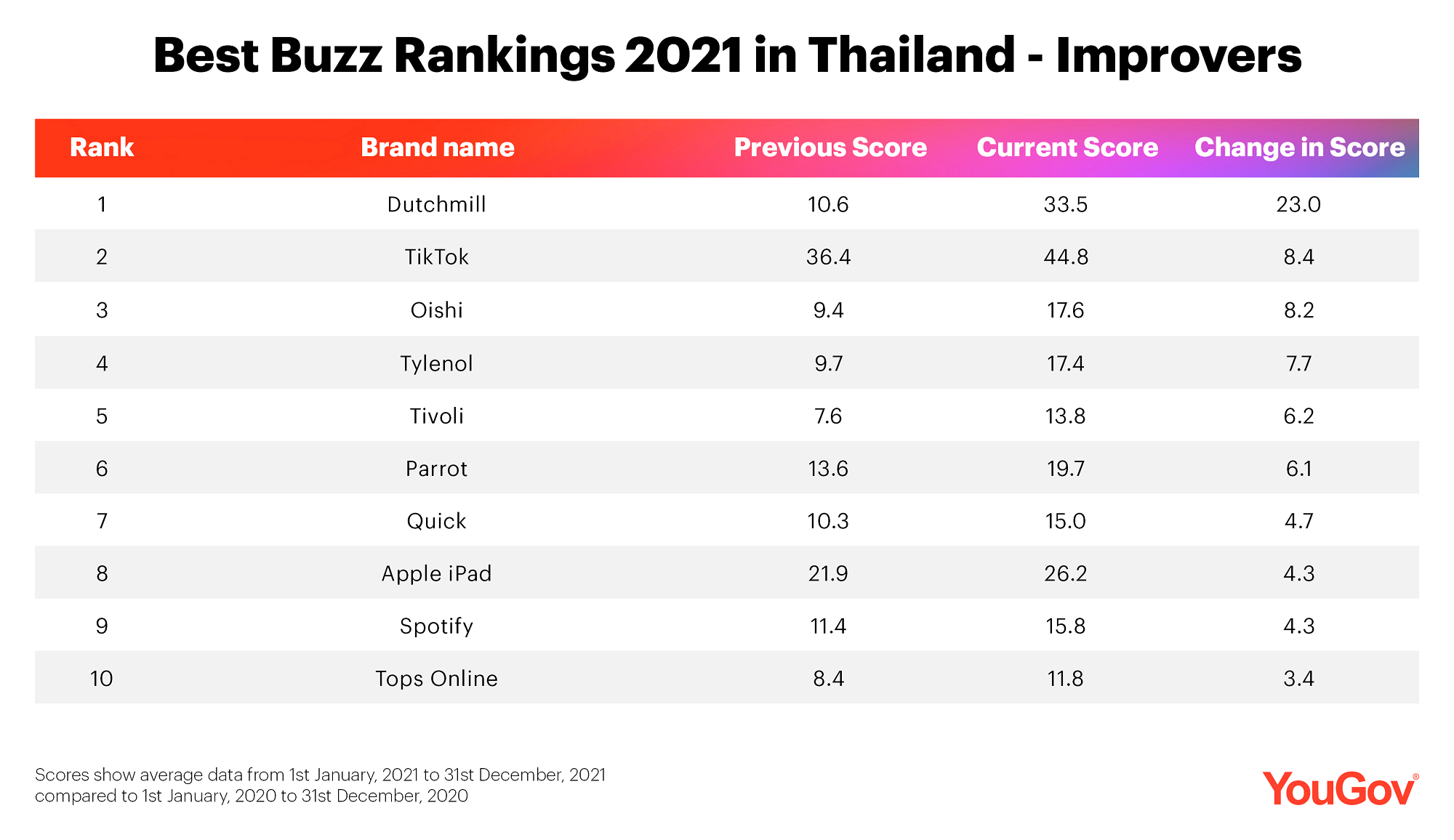 Apple iPad, the only tech entity on the list, came in eighth place with an improved score of +4.3 points, while music streaming service Spotify (+4.3 points) and online grocery shopping platform Tops Online (+3.4 points) topped off the improvers list.

The brands in YouGov Best Buzz Rankings 2021 were ranked based on the Buzz score, which asks respondents, “If you've heard anything about the brand in the last two weeks, through advertising, news or word of mouth, was it positive or negative?” Scores are net scores, calculated by subtracting the percentage of negative responses from the percentage of positive responses for each brand.

The Buzz Rankings chart shows the brands with the highest average Buzz scores between January 1st and December 31st, 2021. The Buzz Improvers chart ranks the brands with the highest increase in Buzz comparing scores in years 2020 and 2021, to be included in the Buzz Improvers list, the variance must be positive. Both scores are online representative.

All Buzz scores listed have been rounded to a single decimal place; however, we have used additional precision to assign ranks.