The pandemic has resulted in the world slipping into a global recession and mass unemployment – and Thailand is no exception. Research shows that the Thai unemployment is nearly at 10 percent due to COVID, and the nation is projected to suffer the worst economic downturn than any Southeast Asian state, due to its high dependence on global tourism. YouGov surveys full-time workers in the nation, to find out how they are coping with job insecurity, and their attitudes towards unemployment. 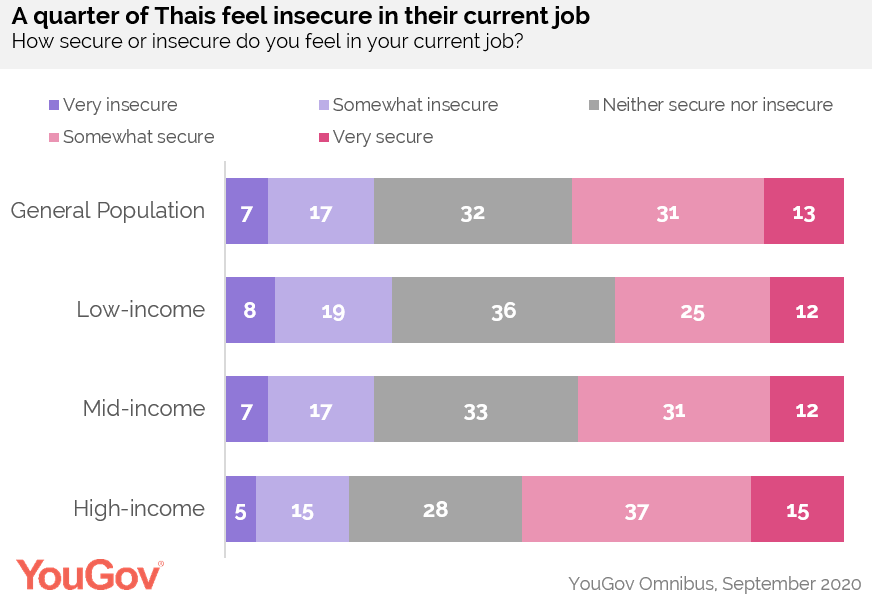 The majority (94%) of employed Thais are experiencing some level of stress over losing their jobs – only a small percentage (6%) feel ‘not at all stressed’. About ten in ten (18%) feel a little stressed, half (49%) feel somewhat stressed, and over a quarter (27%) feel very stressed. Unsurprisingly, those who are feeling ‘very insecure’ in their jobs are the most likely to feel very stressed – with almost two-thirds (65%) saying so, as opposed to those who feel ‘very secure’ (21%).

In the event of losing their jobs tomorrow, two-thirds (67%) believe it will be difficult to find another one of similar pay and benefits – almost two in five (38%) think it’ll be ‘somewhat difficult’ and three in ten (29%) think it’ll be ‘very difficult’. Two in ten (22%) are indifferent, and the remaining one in ten (9%) would find it easy. Mid-income earners (monthly household income between THB 15,001 and THB 44,999) are the most likely to find it difficult to find another job, and high-income earners are the least likely (68% vs. 66%). A third (33%) believe they will be able to find a new job within three months should they find themselves unemployed tomorrow. Two in ten (20%) think this will be between three to six months, and the other two in ten (19%) think this will take between six months and a year. One in six (17%) think it will take longer than a year to find another job, and the remaining one in ten (11%) are unsure.

***Results based on 1,479 Thais employed in full-time jobs surveyed on YouGov Omnibus