The topic of cancel culture is a popular one in today’s media age, and has cropped up again recently with a popular transgender TV personality being caught in the crosshairs following her expletive comments. Latest YouGov data looks at the modern day phenomenon of cancel culture and thoughts on what it takes to cancel a public figure or brand.

The majority (87%) of Thai have heard about cancel culture, but only six in ten (57%) know exactly what it means. Those from high income households (earning more than THB 50,000 a month) are much more likely to know what cancel culture is compared to low income households (earning less than THB 25,000 a month) (70% vs. 51%). For the purposes of this survey, ‘cancelling’ has been defined as withdrawing support for public figures and companies after they have done or said something considered objectionable or offensive. 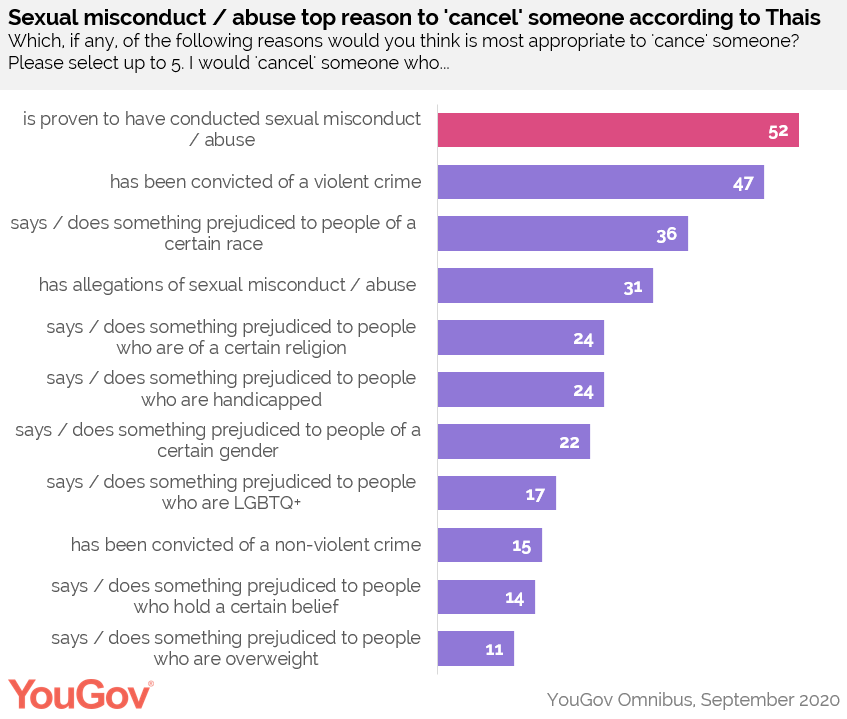 As a whole, two-thirds (65%) of Thais agree that cancel culture keeps public figures and companies accountable for the things they say or do. A quarter (26%) are undecided, and one in ten (9%) disagree. Three in ten (30%) however, believe that cancel culture encourages cyberbullying, and a similar amount (27%) thinks that it is pointless and ineffective.

Siriporn Kittichutchawarl, Country Manager at YouGov Thailand commented: “In this digital age, with Thais spending so much time on social media, it is perhaps unsurprising that the majority of Thais are aware of cancel culture – and a significant amount have ‘cancelled’ a public figure or brand.

***Results based on 2,080 Thais surveyed on YouGov Omnibus