As the Thai government begins discussions on whether to open the border, YouGov looks at what locals think about re-opening the country to tourists, and what they think of the nation’s tourism industry as a whole.

Prime Minister Prayut Chan-o-cha is currently debating whether foreign tourists from countries where the coronavirus appears to be under control should be allowed back in the country. Tourism is a significant economic contribution to Thailand. In 2018, travel and tourism contributed to about 21.6% of the GDP, and the pandemic has undoubtedly affected the industry. Three in five (63%) think the border should open in the next six months – of which, a quarter (26%) believe this should be in the next three months. A quarter (26%) think this should be within the next six months to a year, and the remaining one in ten (11%) think the border should not open until after a year.

Asking whether Thais would agree with a decision to open up borders to certain countries, under three in ten (28%) agree. Over half (54%) disagree and the remaining 17% are undecided. As a whole, in spite of the large economic contribution tourists bring to the nation, only two in five (41%) think they have a positive impact on the country. Over one in ten (12%) describe the impact of tourism as “very positive”, three in ten (29%) as “somewhat positive”, two in ten (22%) as “somewhat negative” and less than one in ten (8%) are “very negative”. The remaining three in ten (30%) are undecided. 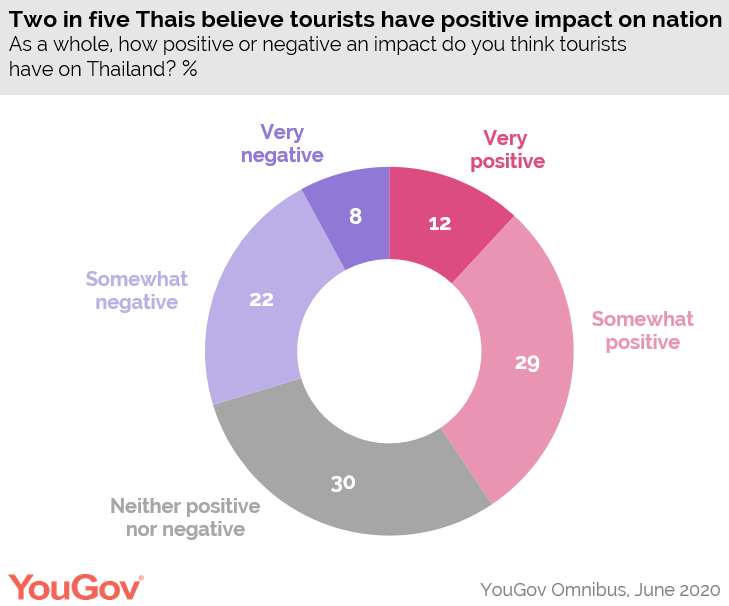 Those with a socioeconomic status (SES) of AB are more likely to think that tourists have a positive impact than those who are of SES DE (44% vs. 35%). Unsurprisingly, those who perceive tourists as having a positive impact are much more likely to be in favour of Thailand opening its border to certain countries than those who perceive tourists as having a negative one (43% vs. 15%).

Jake Gammon, Head of Omnibus APAC at YouGov Omnibus commented: “Though tourism plays a huge role in contributing to the nation’s economy, it appears most Thais are not quite ready for their borders to be open just yet. Interestingly, despite tourists having a significant economic contribution; Thais do not particularly feel that tourists have a positive impact on the nation as a whole. It will be interesting to see if this changes when travel returns to a post-COVID world.”

***Results based on 2,069 Thais surveyed on YouGov Omnibus