This month, chocolate brand Kit Kat is the brand that has achieved the highest uplift in its Ad Awareness over the past month.

The rise coincides with their latest Kit Kat Love campaign, promoting their new limited edition Valentine’s Day Kit Kats. The ad has over forty one million views on YouTube alone.

Launched about a month ago, the Valentine’s Day themed ad starts with two pupils in a classroom, chatting excited about their crushes. Their conversation is cut short when one of the boys object of affection walks past, and he becomes tongue-tied. The clip cuts to other situations where men have been tongue-tied, including a scene from the Chinese dynasty. The ad then goes back to the classroom scene, where other admirers have surrounded the boys crush. He purchases Kit Kat Love, and gives it to her and she is immediately won over. The ad also shows him winning a bouquet of Kit Kats by matching the right wrappers. 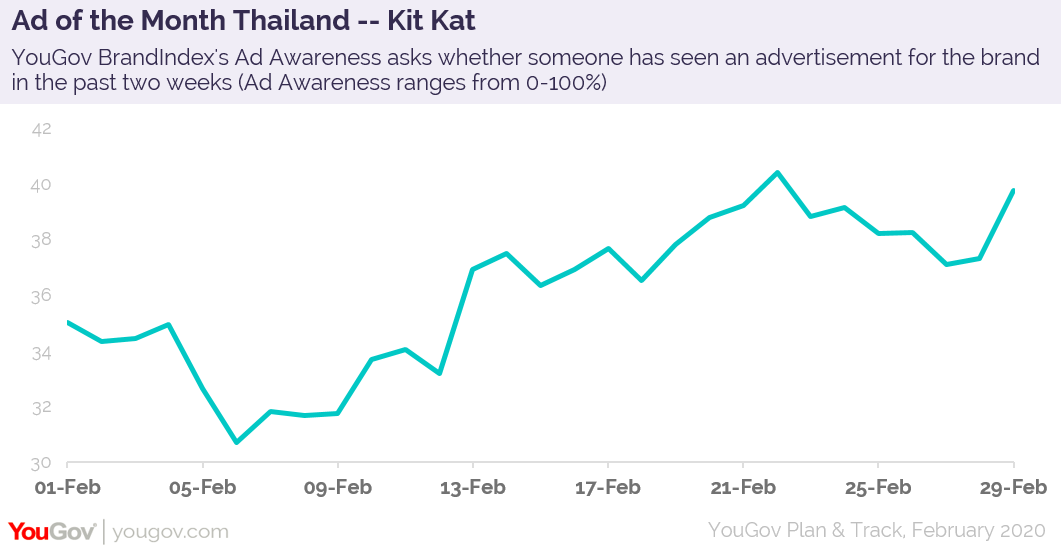 YouGov BrandIndex data shows that Kit Kat’s ads have captured Thai audience’s hearts and attention. Ad Awareness score score (whether someone has seen an advert for the brand in the past two weeks) has risen from 35.0 to 39.8, jumping +4.8 points.

Thais are not only noticing Kit Kat ads, they are also now more likely to purchase from them, with an increase of Purchase Intent score of 4.3 to 8.0, up +3.7 points.