Thai social media users spend an average of six hours and twenty-one minutes a day across platforms, the latest research from YouGov reveals.

The data shows that one in five (22%) spend more than nine hours a day checking their social media accounts, compared to just 4% who are online for less than an hour. 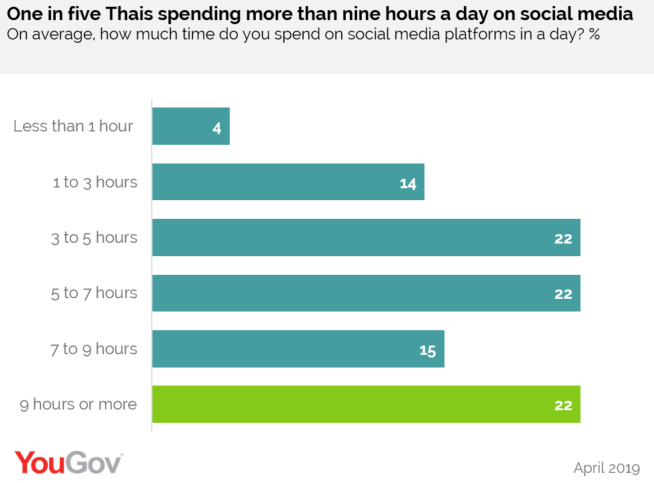 The survey shows that while quarter (25%) of Thais have tried a social media “detox” – staying away from social media for a set period of time – more than nine in ten (92%) are unwilling to permanently delete their accounts, even for money.

YouGov’s research shows that LINE is the most used platform in Thailand, with over eight in ten (86%) of Thais using the app at least once a week. This is followed by Facebook (84%), YouTube (78%), Facebook Messenger (64%) and Instagram (51%).

The data finds that Thai’s main motivation for going on social media is to stay up to date with news and current events (68%), closely followed by keeping in touch with friends (67%). Other reasons include to sharing content with people (52%), finding funny or engaging content (43%) and taking part in specific interest groups (39%).

Aitsanart Wuthithanakul, Head of YouGov Thailand commented: “Thais love social media. It is now such an integral part of their lives that the average Thai with an account spends over a quarter of each day on social media platforms. In the age of digital marketing, understanding the relationship consumers have with their social media accounts is essential in reaching those Thais who are always on their phones.”