As the world’s sixth biggest contributor of ocean plastic waste, latest YouGov research shows that Thais are still big culprits in single-use plastic, with over half (53%) using plastic straws daily. 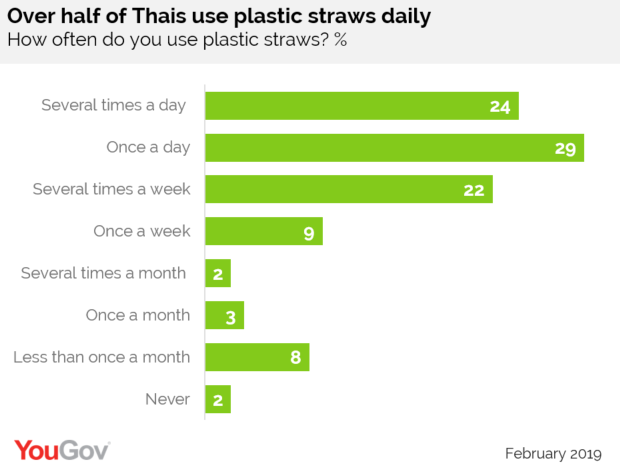 Although plastic straw use is high, a significant percentage of Thais have reusable straws, with over four in ten (42%) owning one and women (47%) being more likely than men (36%) to own one. Reusable straws also seem most popular amongst those aged 35 to 44 (51%) and least popular among those aged 45 and above (26%).

Amongst the reasons for not owning a reusable straw, the most popular is that it is inconvenient to carry one around (47%). This is followed by people not seeing the need to use a reusable straw (34%) and not knowing where to get one (23%).

Overall, the majority (95%) of Thais agree that it is important to conserve the environment, with six in ten (61%) thinking it “very” important, a third (33%) viewing it as “somewhat” important. The remaining 5% don’t think it is important.

Thais believe that consumers (61%) have the biggest role to play in conserving the environment, followed by the government (19%) and businesses and NGOs (both 10%).

Aitsanart Wuthithankul, Head of YouGov Thailand commented: “While most Thais believe that conserving the environment is paramount, this doesn’t appear to have translated to their actions. Our data shows that significant amount of Thais are still relying on single-use plastics in their daily lives, even though they mostly agree that the responsibility of environmental conservation lies on the consumer.”